The magician in interior decoration

LVL stands for Laminated Veneer Lumber. After rotary cut from logs, it gets dried, with glue application, and manufactured into required thickness through hot press. Because the flaw in the logs can be predicted and avoid in rotary cutting stage, more stable customization in the making of LVL is becoming possible. Chuan Chi's OE LVL has an extreme strong structure to be capable of suiting interior structuring need while also being water/moist resistant All of Chuan Chi's LVL series are made with the best structural calculation in wood species, combinations and quality certifications. As a gentle note, Premium Meranti LVL are only available in Chuan Chi (Exclusive selling agent) in Taiwan.

In terms of water resistant, plywood can pass National SGS and CNS1349 lab test. The lab test consists of putting the plywood into the boiling water for 4 hours and then into dryer for 20 hours. This has to be done twice without delamination. This proven the capability of LVL of being water and moist resistant. 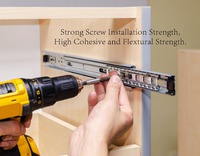 LVL is like the magician in interior decoration design, not only it can be used as structural outline and shaping, it can also be used as special furniture and design use. Thus, this is the reason why screw installation strength, cohesive and flextural strength is so important. With long term continuous lab tests, Chuan Chi's LVL perfectly combines the triangular conjunction of glue, wood species and process to make the LVL that is stronger than solid lumber or single tree species lumbers.

With many years of continuous lab test and construction site tests, we control the bug issues starting from source and manufacturing process. Bug ovum occurring rate is 0% and invasion of bugs (causing damage) rate lower than 1%.